A technology of the preparation of low-temperature N-nitramine plasticizers of an active binder was developed to be used as ingredients of promising special formulations for applications with a broad temperature range. Selection, justification and elaboration of the technology for preparing plasticizers of the N-nitrooxazolidine sequence from available feedstock were performed with a view to improve serviceability and commercial efficiency of the processes as well as to enable their scale-up. Testing of the results is in progress at the Federal Center for Dual Technologies (FCDT) “Soyuz”.

A method of application of ultrathin (15-20 nm) polymer film on crystals of high energy compounds (HEC) in the supercritical carbon dioxide medium has been developed for the first time in Russia. The treatment dramatically reduces the HEC impact sensitivity (2-3 times) while the same thermal stability is maintained. Other methods of polymer coating of energy materials lead to a decrease in sensitivity usually after applying at least 10 % wt. of the supported polymer, which significantly impairs energy performance of HEC and their products. The result opens up a pathway to creating new technologies for producing high performance and safe-to-handle energy materials.

A preparative total synthesis of (5R, 6S)-Lazofoxyfen, a non-steroidal anti-estrogen of the new generation, was developed. The synthesis was performed in gram quantities with available reagents and in simple reaction conditions and without chromatographic separation or purification. Since only this enantiomer has biological activity (daily dose of 0.5 mg), efficient enzymatic racemate deracemization under the action of available pancreatic lipase was performed in the final step. [The synthesis method has been registered as ZIOC RAS know-how]. 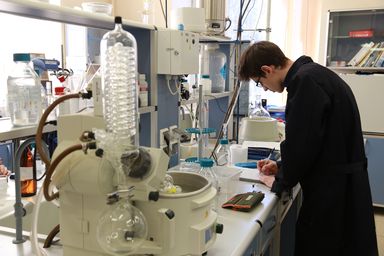 On the basis of R&D findings of ZIOC RAS, the Pilot Plant Redkino scaled up and implemented an original safe process of catalytic cyclopropanation of strained unsaturated hydrocarbons by diazomethane in situ generated directly in the reaction medium, which provides a 100% yield of cyclopropane. The process is the basis of the key production stage of high energy rocket propellant Decylin-M that was successfully tested during operational trials of air-launched cruise missiles.

A diagnostic immunoenzymatic test system was developed for the detection of the myco polysaccharide antigen of mold fungi and yeast. The diagnosticum’s design bases on the use of a synthetic oligosaccharide and its conjugate with a protein carrier as key components synthesized in ZIOC RAS as well as antibodies obtained by immunization of laboratory animals with a glycoconjugate. The diagnosticum is designated for the detection of myco pathogens in man-caused objects such as dust, mold, etc. A Russian Federation patent has been obtained. Diagnostic kits are manufactured by Biotechnology Company ”Bioservice”. 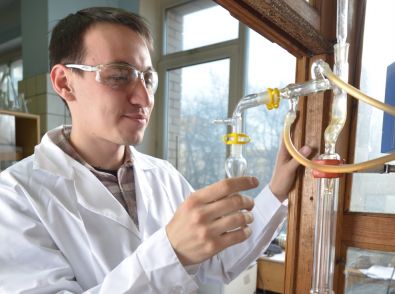 A technology of drilling waste recycling in oil production was designed. It employs a carbonated sorbent-destructor for the conversion of drilling waste to neutral soil (class V of hazard by Russian regulations). The new nanosorbent-biodegrader “CD-1” is an “incubator” for oil-oxidizing microorganisms and a catalyst of oxidation of various organic compounds. The new sorbent is also efficient for absorption of emergency oil spills from the ground and oil sludge management. Pilot tests were performed at Samaraneftegaz in reclamation of drill cuttings. According to the independent biological test and agrochemical survey findings the oil content in the ground dropped more than 150-fold. An application for RF patenting has been prepared. 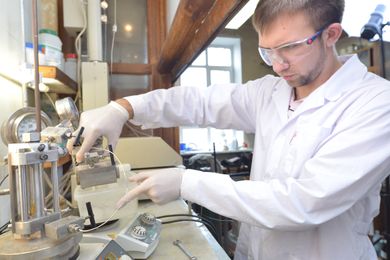 A new class of granular NiCo metal oxide systems for the conversion of methane to synthesis gas was developed. The introduction of graphite powder into alumina oxide and its subsequent burning-off ensures a necessary porosity of the carrier (up to 0.4 ml/g). A method of multiple impregnation of the carrier with intermediate salt decomposition was used for supporting the NiCo component. The resulting catalyst contains 10 % wt. of active oxygen, which makes it promising for practical use and allows pilot testing.

A method for studying heterocyclic compounds, amino acids and carbohydrates as well as their reaction mixtures using high-resolution NMR 13C in ionic liquids was developed on a basis of a 5-mm NMR ampoule reactor designed in ZIOC earlier. It is a pioneering method for monitoring of the conversion of carbohydrates to 5-hydroxymethylfurfurol and quantitative measurements. The method is ready for practical application.

Alexey Sukhorukov, N. D. Zelinsky Institute of Organic Chemistry, Moscow, Russia, and colleagues studied the selective reactions of in-situ generated metal azides on N,N-bis(oxy)enamines. By combining readily generated bis(oxy)enamine substrates with sodium azide and one of a variety of metal salts (including Mg, Cu, Zn, Co, and Ni), the researchers showed that the metal cation selectively alters the mechanism to favor the formation of specific organoazide products.
All Events »
Feedback