The laboratory was founded in 1995 on the basis of a part of Laboratory of Nitrogen-Containing Compounds and since then it has been headed by its current leader.

Oleg A. Rakitin is also the head of the joint laboratory of IOC RAS and South Ural State University

1. Novel pathways to the polysulfur-nitrogen heterocycles

A discovery of novel pathways to the synthesis of polysulfur-nitrogen heterocycles containing several sulfur atoms and a nitrogen atom on the basis of a reaction of a complex of sulfur monochloride with a nitrogen-containing base; synthesis of several novel heterocyclic systems, including 1,2- and 1,4-thiazines, thiophenes, monocyclic and fused 1,2-dithioles and 1,2,3-dithiazoles, 1,2,3,4,5-pentathiepins, 1,2,3,4,5,6,7-heptathiocans, etc. with anticancer, antimicrobial and antifungal activity.

Synthesized 1,2,3,4,5-pentathiepines have been studied as cathodic materials for storage batteries; fused 1,4-dithiines have been proposed as multi-purpose components for photoreceptors.

Physiologically safe OLED based on a hybrid of organic and organometallic emitting materials was created by the joint team of Laboratory N31 (IOC RAS), South Ural State University, P.N. Lebedev Physical Institute of the Russian Academy of Sciences, and D.I. Mendeleev University of Chemical Technology of Russia. Due to an innovative design and a combination of new specially synthesized luminophores, the new light source practically has no harmful radiation in the blue region of the spectrum, and the color characteristics of its radiation are similar to the light characteristics of the flame of ordinary candles. At the same time, such a diode is much more energy-efficient than incandescent lamps, and its brightness characteristics comply with the requirements of modern light sources. On average, an OLED panel made from new materials with 10x10 cm size (the half of the screen of a small smartphone) under optimal conditions provides the same level of illumination as 10-12 ordinary candles, while its brightness will be 4-5 times greater than a standard computer monitor. A very important feature of the developed device is the lack of rare and precious metals, such as iridium and platinum (the basis of modern industrial luminophores for OLED devices), and the relative simplicity of the design.

It was founded that the polysulfur heterocycles synthesized at the Laboratory N31 (IOC RAS) have a common mechanism of action and high selectivity against the cat immunodeficiency virus, which is the closest analogue of the HIV. It was shown that compounds of different heterocyclic structures (such as bis(dithiolo)thiazines, bis(dithiolo)pyrroles, tetrathiocines, dithiazoles, dithioloindoles, pentathiepins and thiaselenazoles) are promising anti-AIDS compounds, which is of great value for the development of not only chemical, but also biological sciences.

These heterocycles with a highly reactive sulfur-sulfur bond can be opened in the body with the formation of dithiols, which interact with the zinc atom removing it from the virus molecule in the form of protein-zinc-thiol complexes and thereby deactivating it. In the course of the work, compounds having together high nanomolar antiviral activity, and also low toxicity to ordinary cells were found, which leads to high values of the therapeutic index. A distinctive feature of this study is a collaboration of a number of groups in the world working in various fields of science. Thus, the synthesis and identification of the structure of new compounds took place at the Laboratory N31 (IOC RAS), studies of activity against the immunodeficiency virus of cats took place at the University of Zurich (Switzerland), studies of the mechanism of action of heterocyclic structures took place at University College London (UK) and the University of North Carolina (USA), computer simulation of the biological effects of our compounds took place at the University of Eastern Finland (Finland).

4. New series of organic sensitizers based on [1,2,5]thia(selena)diazolo[3,4-c]pyridines

Solar cells based on individual organic molecules have a number of undeniable advantages over widely used silicon counterparts: low cost, the simplicity of the design, the possibility of a wide modification of properties and improved performance. Dye-sensitized solar cells are the most promising class of organic-based solar cells. One of the most effective strategies for the design of organic dyes is the strategy of introducing an additional acceptor group (А) between the donor and the π-bridge (D-A-π-А). Two new series of organic sensitizers based on new internal acceptors ([1,2,5]thiadiazolo[3,4-c]pyridine and [1,2,5]selenadiazolo[3,4-c]pyridine) were synthesized at the Laboratory N31 (IOC RAS) and their photovoltaic efficiency was studied at the University of Edinburgh (UK). 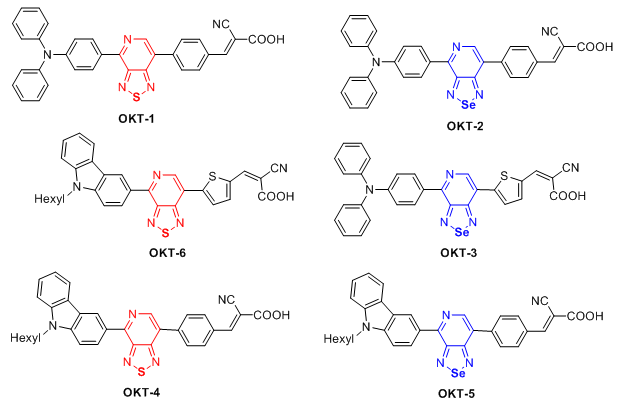 16. E. A. Knyazeva, O. A. Rakitin “Influence of structural factors on the photovoltaic properties

GLYCOSCIENCES AND GLYCOTECHNOLOGIES FOR MEDICINE – School for Young Researchers